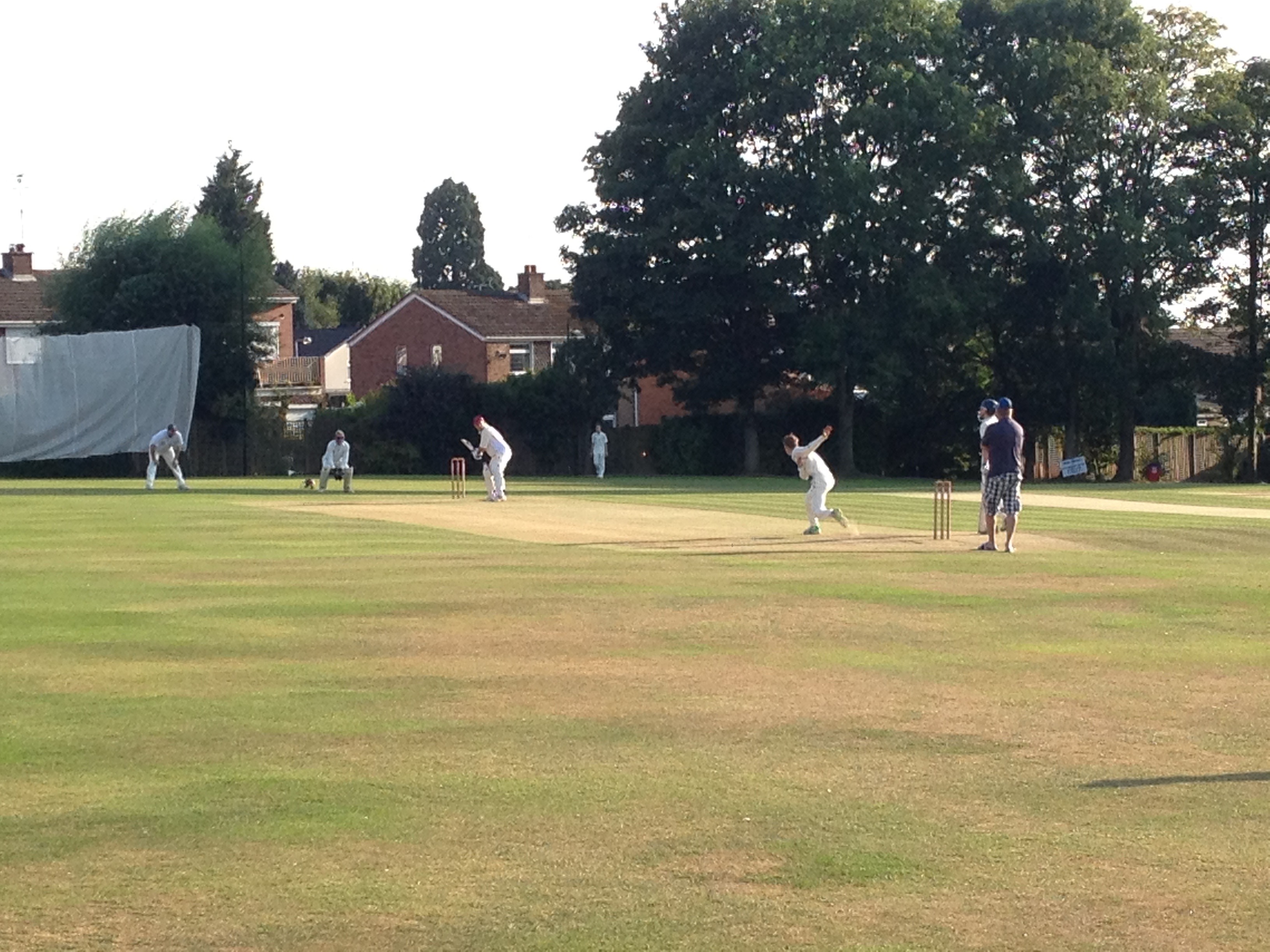 Youth and experience combined to good effect at Pedmore to bring the Bedouins a resounding seven-wicket win in the last game of the 2015 season.  It was the two teenage opening bowlers and the two “experienced” (combined age of over 120) opening batsmen that set up the win, as the Beds rattled up 130 for 3, to win with a couple of overs to spare.

Owing to some non-availabilities – some for more painful reasons than others! – there were a couple of unfamiliar faces in the Bedouins line-up.  Ethan Jones, another of Austin’s mates (he has a secret production line somewhere), proved a very able opening bowler, belying his somewhat tender years.  And Harry Stanier, son of Jon, contributed some hefty blows to the Beds’ innings.

Unfortunately, our hosts seemed to have less idea of the importance of prompt arrival for an evening game beginning in mid-August.  So, while all Bedouins were changed and on parade by 5.45, the opposition arrived in dribs and drabs somewhat later, resulting in the toss having to be falsified in order to get the game underway while there was still some light around.

Therefore batting first, Pedmore made 127 for 6 in their 15 eight-ball overs, Ethan John taking 2 for 16 and Josh Lemm, opening the bowling at the other end, 1 for 21.  There was also a wicket apiece for Stanier senior and junior.

For the second time this season, John Howells and Jon Stanier formed a highly experienced opening pair.  Both were in fine form and both retired on 30.  The former, back on a favourite old stamping ground of his, showed the return of much of his old timing in hitting five boundaries, while Jon Stanier reached the boundary ropes six times.

Not to be outdone, Richard Ferguson and Richard Spratley also brought the crowd to its feet with a couple of classic cover drives.  With Harry Stanier hitting 29 not out, the Bedouins’ total of 130 for 3 was more than enough to see off a team of experienced cricketers.  Not bad for what some appear to consider “a small club”!

The Bedouins end their 2015 season in good shape.  A number of welcome new regulars have all shown good form.  Our finances seem pretty healthy.  Several new fixtures are in the offing for 2016.  And our “buffet belles” have continued to enable us to provide first-class hospitality.

It hasn’t been the most successful season from a win/lose perspective – a pretty even split between victories and defeats – but Bedouins have continued to play cricket the way they want to – “seriously for fun”.

Now we’d like a few more than the “regulars” turning up for the AGM, and a bumper turn-out for the Duck Supper.  AGM at the Fox at Stourton on Tuesday, November 3; Duck Supper at the Cat at Enville on Friday, November 27.  But you didn’t need reminding about those dates, did you? 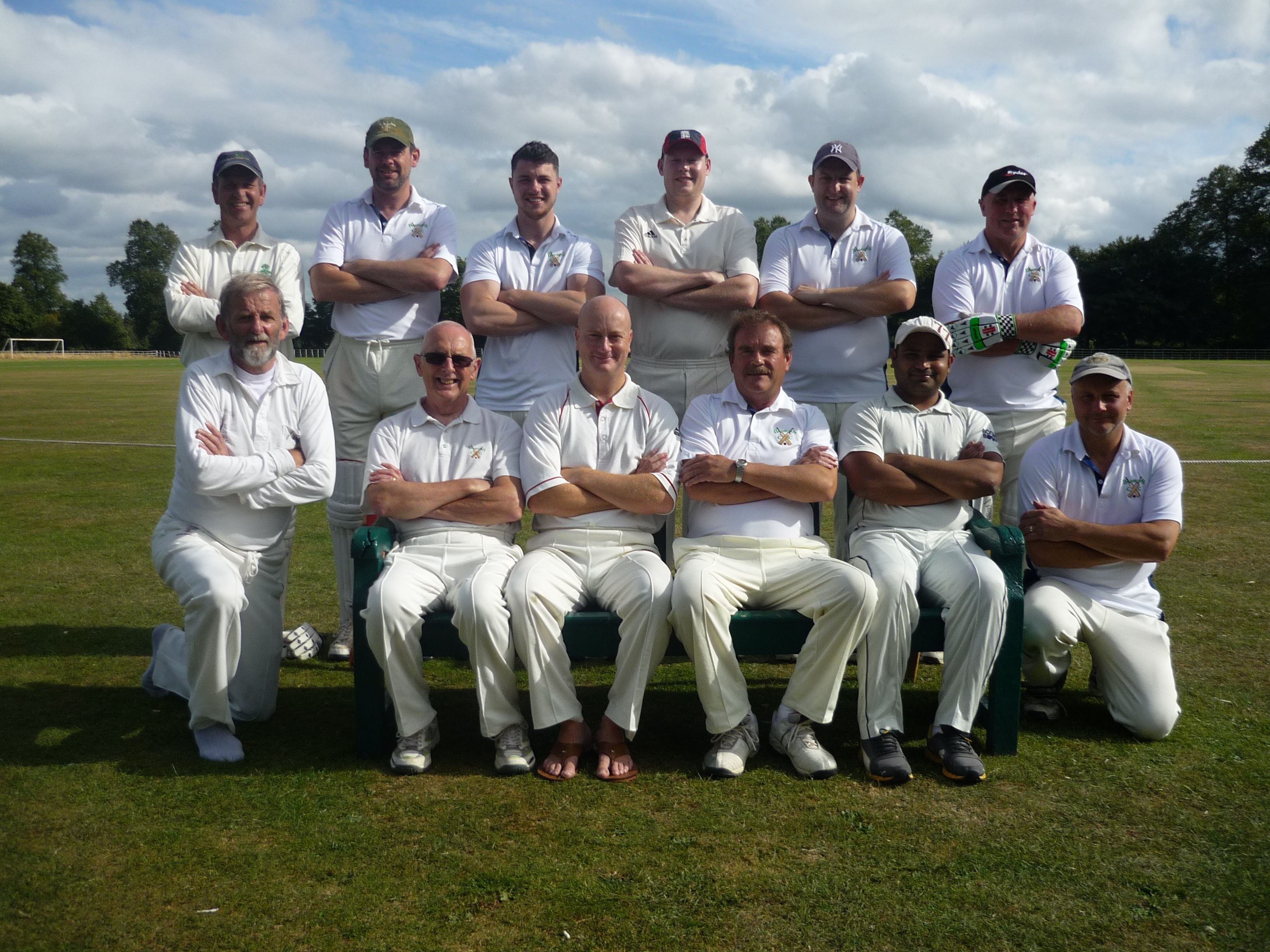 Our friends from up north, SSP, came down from Halifax for the 21st annual meeting with the Bedouins, at Enville, and returned up north with the Rasche Trophy safely gathered in for another year.  It was a highly competitive match, but played in the right friendly spirit and resulted in a total of over 400 runs, with slightly more than half of them going to SSP.

The Enville outfield was lightning quick, and anything that got past the fielder went for four.  Thus it was that SSP opener, Nathaniel Hyde, rattled up 52 retired, with 11 boundaries and one six meaning that he needed to run only two singles.  On the whole the Beds would have preferred Dr Jekyll to have turned up instead of Mr Hyde, because later he contributed eight accurate overs and was as athletic as one or two others among the SSP fielders.

The other SSP opener John Dobson, a regular thorn in the Beds’ side over the years, also hit 50, but in somewhat more sedate fashion.  His brother Tony also made 47 not out and later took three wickets.

The first SSP wicket fell in the 28th over with the score on 152. so the Bedouins bowlers did well in the later stages to restrict the total to 216 for 7 in 40 overs.  That was largely thanks to Jon Stanier, who had the excellent figures of 4 for 23 in six overs.  There were also two wickets for Spratters, and one for Adrian Susman.

In the Bedouins innings, the first six batsmen all made double figures, led by openers Paul Lippitt (53 not out, including nine boundaries), and Jon Stanier (53 retired, including 10 boundaries).  Adrian Susman made 16, Jono Hill 24, John Howells 18 and skipper-for-the-day Lee Bywater, who had brought his own fan club with him, 22.

At one stage, it looked as if the home side might make the 217 needed for an unlikely win, but the SSP front-line bowlers were just too strong and managed to rein in the scoring rate just when it really mattered.  The result was a 14-run defeat for the Beds, who had to content themselves with having put in an excellent all-round performance against a team that included some very capable cricketers.

The other highlight of the day was the Bedouettes’ catering.  They served up pre-match sandwiches etc, between-innings tea and cakes, and post-match goodies that together made up a memorable package.  Well done, thanks.  A gold star for each of you! 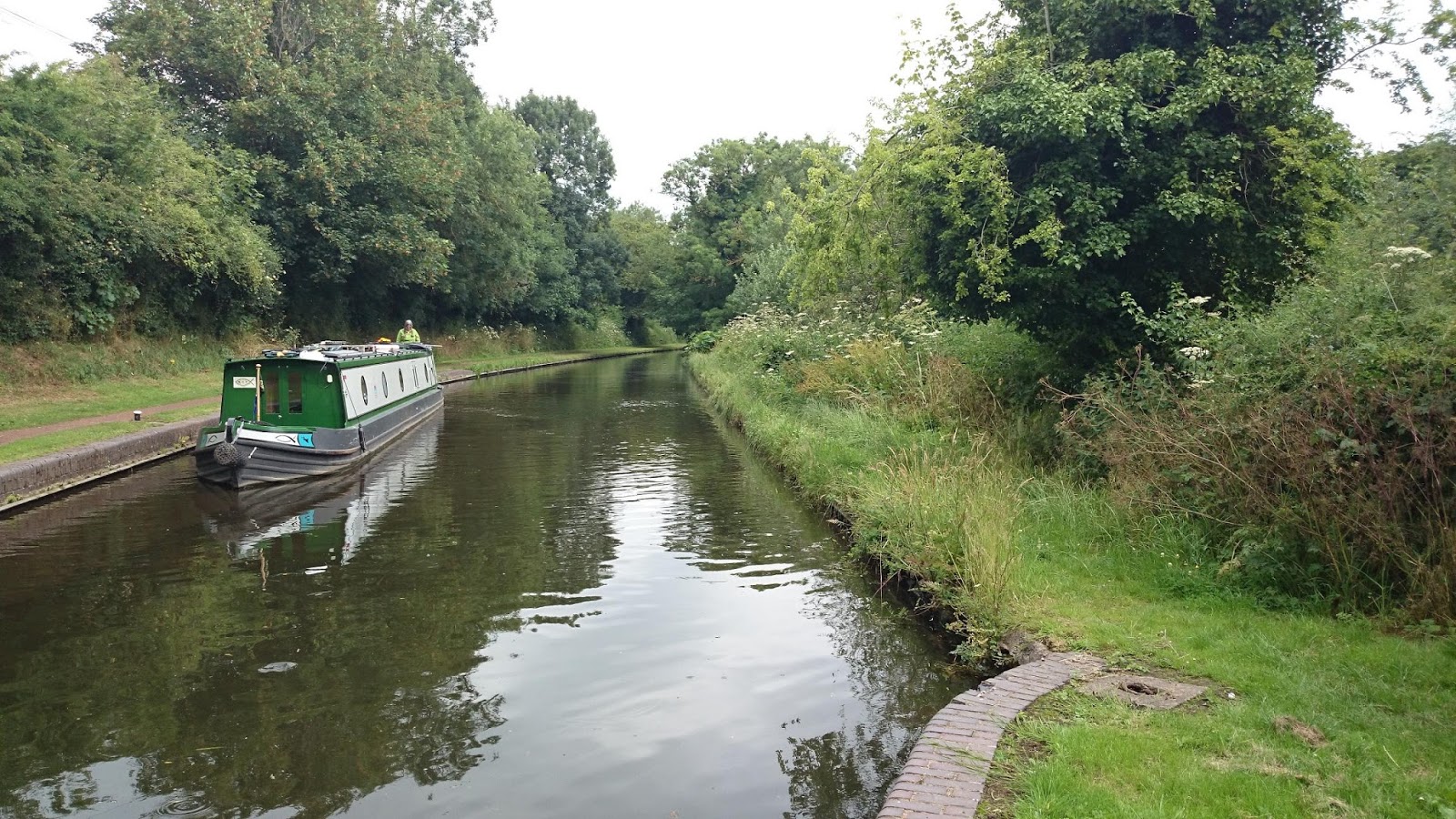 The delightful Beacon CC ground at Wombourne has the Staffs Worcester Canal running alongside, close enough to ensure the disappearance there of a few cricket balls during a match; hence the very long-handled fishing net kept permanently at that end of the ground.  For those unaware of cricket balls’ propensities, they will float.

Last season, in the first meeting of Beacon with the Bedouins, balls were being hit for six into the “cut” with monotonous regularity – unfortunately most of them by the Beacon batsmen.  But not so this time.  When the Beds met the Beacon men in early August, the fishing net stayed mostly dry.  Bedouins skipper John Branch put the second ball of the match there, but there were only two sixes during the evening, one to each side, and neither of them into the drink.

Put in to bat, the Beds got off to a good start, with Branch adding two more boundaries before being bowled for 16, and Jon Stanier, hitting four fours and a six in his retirement 30.  John Howells (15) and Paul Lippitt (18 not out) then took the final score on to 99 for the loss of three wickets.

Beacon are able to field a team of more than capable cricketers, and a target of 100 in 20 overs was probably not quite enough to test them.  Although Lee Bywater and Spratters did an excellent job of keeping the opening batsmen quiet (a total of just 16 runs in the first six overs), the home side proved their batting ability by hitting the winning runs with just four wickets down and more than two overs to spare.  There was a wicket for Richard Spratley and one for Austin Gregory.  At the close Stanier finished up with the ridiculous figures of  0.3 overs, 2 for 3.

They’re a good bunch to play against at Beacon, and they have now become an established part of the Bedouins fixture list, both home and away.  They attend to the finer points of the game, by providing an excellent post-match buffet, although some of the more elderly gentlemen in the Beds ranks could do with a few more seats available in the pavilion after a gruelling 20 overs, no less, in the field!