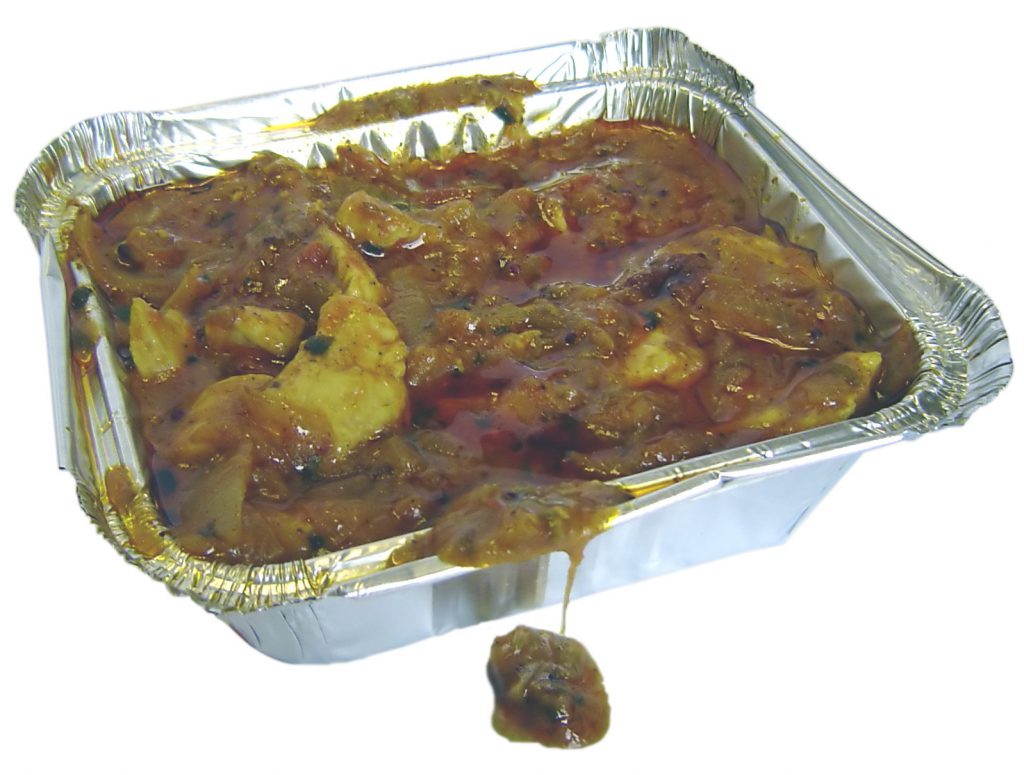 After two abortive attempts to get a new fixture under way between the Beds and Stanier CC – also known as Oldswinford CC –the weather finally turned favourable enough, if somewhat gloomy, to enable the teams to meet at OCC’s Stourbridge home on July 10th. Once again, the Bedouins did their bit by arriving in time for a prompt 6 p.m. start – well done, lads!

Thank heaven we did finally get the game on; it turned out to be just the kind of fixture we like, against a side determined to enjoy themselves but still playing the game “properly”. This could be the start of annual meetings, we hope.

Batting first, the Beds suffered a couple of early setbacks, with Ian Woodhouse making an unusually early exit, and Paul Lippitt following immediately for an unlucky first-ball duck – thanks for coming, Paul! John Branch was doing his best to avoid running at all costs at the other end, and he was joined by Jon Stanier, who was determined to make a decent score against his old team-mates. Both did well, the skipper finally dismissed for 28, and Stanier going on to retire with 33 to his name.

A couple of quick exits followed, before Lee Bywater and Austin Gregory came together and put on 34 priceless runs in the last four overs to take the final score to 107 for 5, Bywater finishing on 16 not out and Gregory on 19 not out.

Josh Lemm had the misfortune to find himself bowling to an in-form opening batsman as Oldswinford began their innings. He was hit for a number of boundaries in his second over, as the Oldswinford opener scored a rapid 33 before retiring, having hit five fours and two sixes. But Josh more than made up for it, with two catches, running back towards the boundary, off the bowling of Spratters – doubtful if any other Bedouin would have got near either of them. Richard Spratley therefore finished his three eight-ball overs with 2 for 7.

There were also wickets for Jon Stanier, Austin Gregory, Lee Baywater, and Adrian Susman. The latter had turned up for a nice restful evening, snapping a few unsuspecting Bedouins (photos here). With one no-show member of the team, he found himself nabbed by the skipper, to come and join in, so that he could contribute a few overs of leg breaks. He did so, to good effect, with two wickets for eight runs. One of those was a superbly rapid bit of stumping by John Howells, who had another a little later.

In the gathering gloom (and with the Bedouins scorer rapidly losing the will to live), it was left to Austin Gregory and Lee Bywater to come together again, this time as “death” bowlers, to see off the Oldswinford innings just four runs short of the target.

Then it was back to the pavilion, for a most acceptable curry and chips, happily rounding off an excellent evening’s entertainment and a season for the Beds that was finally rescued by some late-season activity, as the weather relented somewhat, and a few good performances with bat and ball. 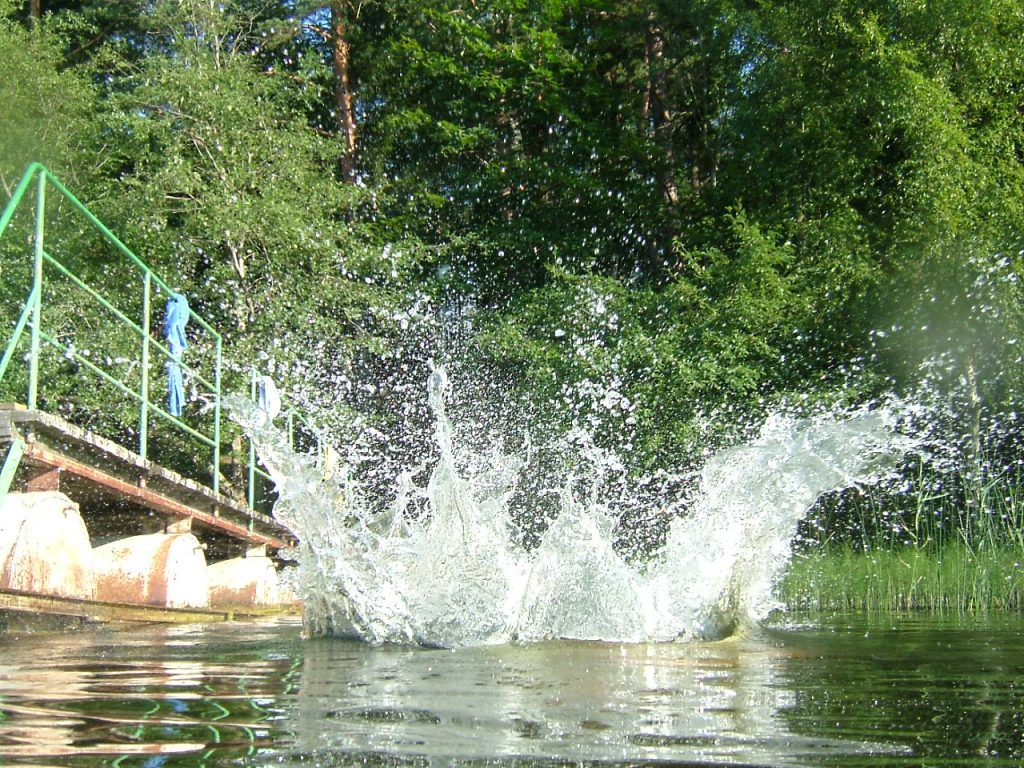 Most normal people would simply enjoy hitting a six. At Beacon’s beautifully manicured ground, where a straight hit can often finish in the canal that runs alongside the ground, there is the prospect of the added frisson (look it up!) of watching the splash as the ball hits the surface – and that’s what Ian Woodhouse reckoned was the biggest thrill of his innings. Well, he doesn’t get out much these days, you see.

In fact, splashing out in that way was only one of Woody’s excitements for the evening. His second six cleared the canal, and the towpath (narrowly missing an elderly couple out for an evening stroll), and the hedge, and disappeared into the farmer’s field beyond. “New balls, please.”

For once, the evening got off to a prompt start. Congratulations to the Bedouins players, who managed to get themselves on parade, “booted and suited”, for a start at 6 p.m. sharp. That, combined with hustle and bustle between overs, meant that the game was completed in reasonable light. And all the better for it.

Spratters was back to his accurate best, as the Beds were asked to bowl first. His four overs went for just nine runs, and he had one wicket to add to a good evening’s work. Josh Lemm opened at the other end and was similarly miserly, giving away just 17 runs in his four overs. It was Lee Bywater who fared best for wickets, having two Beacon batsmen clean-bowled.

On a fast-scoring outfield, the Bedouins did well to restrict the home side to 118 for 3.

A start of just two runs in the first two overs was scarcely promising in the Beds’ reply, but Ian Woodhouse got going with a couple of boundaries, as John Branch also hit the occasional boundary at the other end – none of that “all-run three” nonsense this time! Woodhouse retired on 33, and, in fact, all five Beds batsmen who got in reached double figures, Adrian Susman rolling back the years with a cleanly struck straight six in his 18 not out.

Neill Smith made 19 and Jono Hill 14 not out, as the Bedouins reached their winning target, 119 for 2, with nearly two overs to spare. An unbiased view – this was the Beds’ best all-round performance for this and many other seasons. 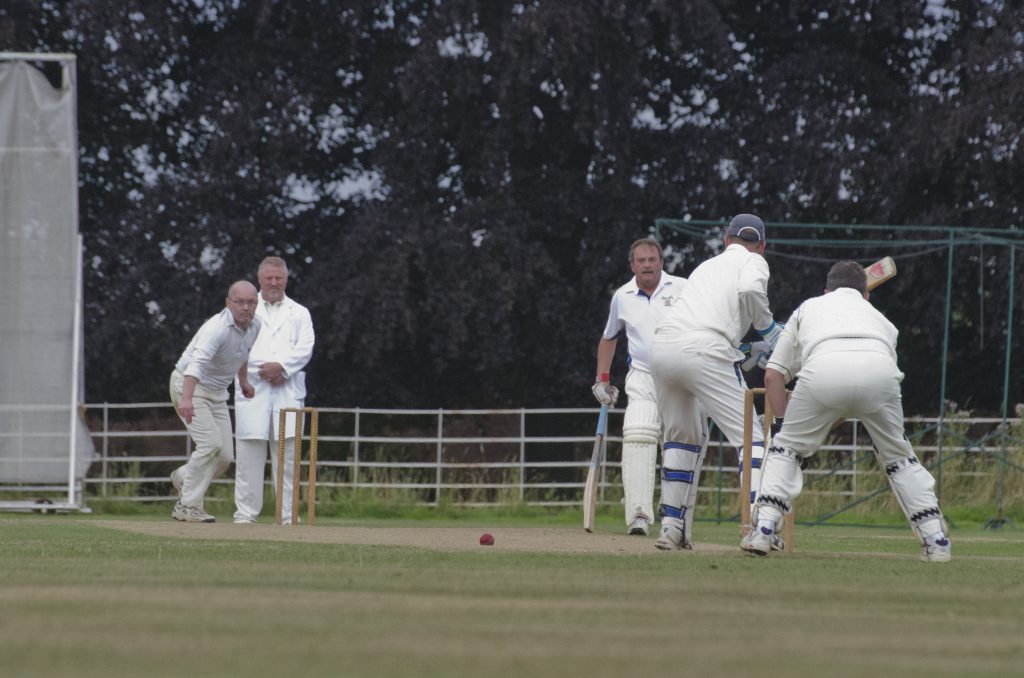 The more observant of those that turned out for the Bedouins (or the OWOBs come to that) may have noticed a figure lurking around the boundary rope during last Sunday’s game with Oldbury Wells Old Boys. That lithe body was Mike George who was stalking and taking photos of the action. He has been kind enough to share some of those pictures with us and they can be found here.

Take a look, it’s worth it and okay, we lost, but it was a great day and one which will hopefully be repeated next season. 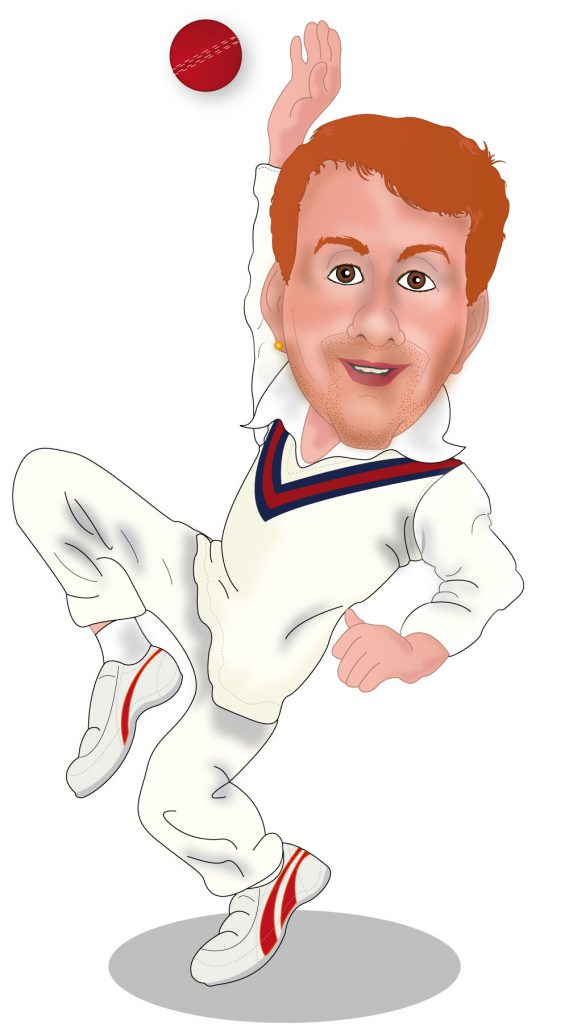 “My son, Richard, will play. He doesn’t play cricket, but he’ll gladly make up the numbers.” Thus David Pearson when we were struggling to get an 11 together for the Sunday game against Oldbury Old Boys.. That led to the highlight of another of those games the Beds should probably have won but finally lost narrowly.

The highlight – two of them, in fact – was the catches Richard Pearson held in the deep field. The first was good enough, but the second was as good as anything seen at the Enville ground for many years. Running from deep mid-on to deep mid-off, he scooped the ball up just before it hit the ground, rolled over a few times, and came up triumphantly with the ball in his hand. The crowd, as they say, went wild.

Oldbury OB – a team assembled by ex-Bed John Richards — had some more than capable early batsmen, two of whom made the retirement score of 50, as the score reached 100 without loss in the 14th over. The Bedouins bowlers managed to keep things in check in the later stages, though, and the final total was 186 for 5 in 35 overs. 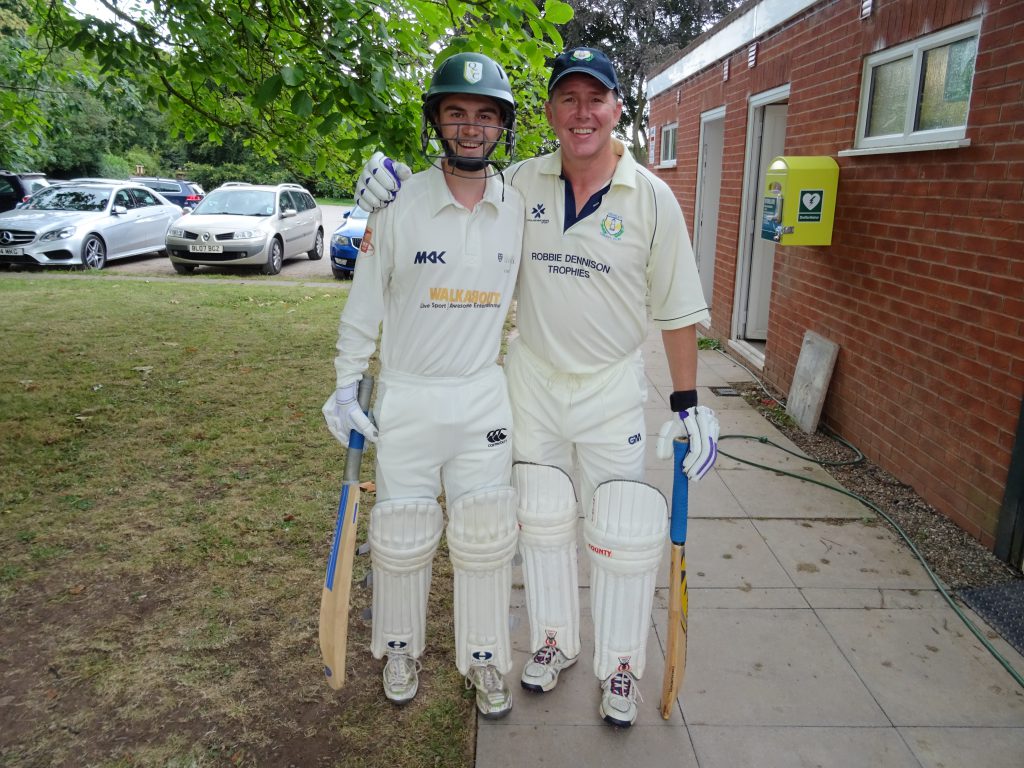 Spratters picked up two wickets, and was just inches short of a caught-and-bowled, as he dived forward in an effort to get the early wicket of one of the openers. It was a vain attempt, but at least it had the secondary effect of rolling the wicket at the same time. Another Beds attempt at a spectacular catch was at square leg, where Andy Hill, making a welcome return after months off with a dodgy back (“Hill’s back’s back”), dived full length and just failed to make a one-handed catch. His ever sympathetic son, fielding nearby, immediately accused him of “dropping a dolly” Ah, the perceptiveness of youth! 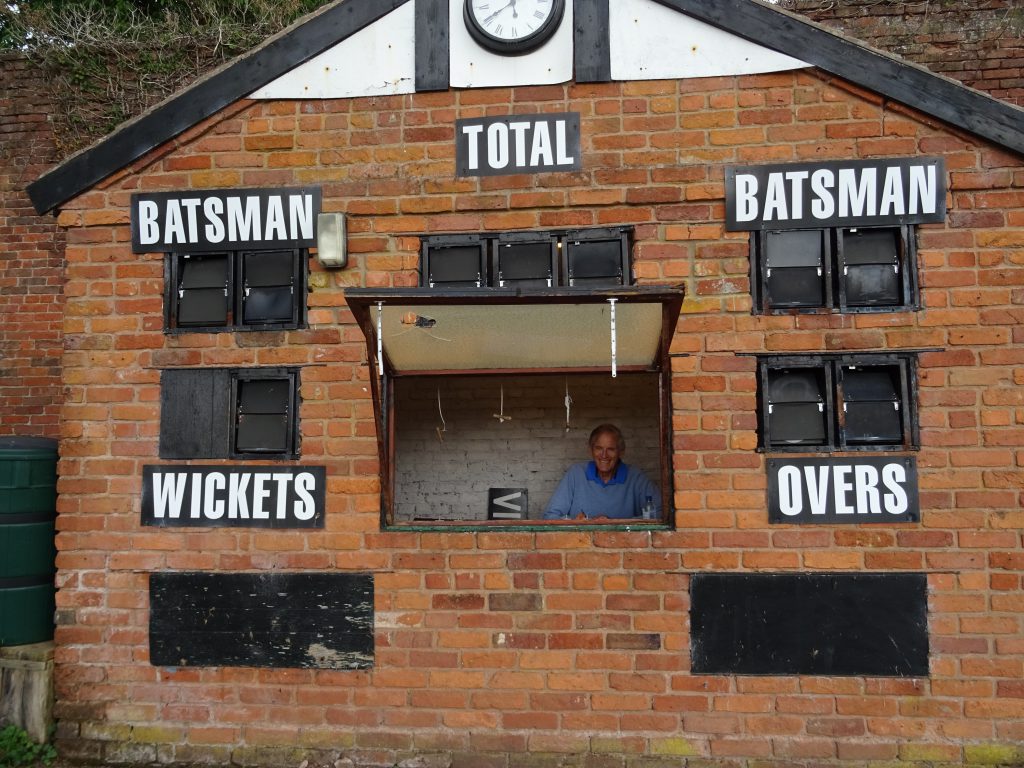 There were wickets for Stanier and Susman, plus one for Stanier mate (yes, another of them – see comments in previous report) Martin Watts (six overs, 1 for 8).

After a typically tempting tea and cakes interlude, the Bedouins began the search for 187 runs to win the game. They made a great start, as John Branch and Jon Stanier put on 96 for the first wicket. The latter was first to reach 50; JB was a little longer to get to the retirement point. Along the way, he broke some kind of record by actually completing an all-run three – first time in living memory. It made the spectators gasp, and to be fair, Branchy was also gasping a bit afterwards. 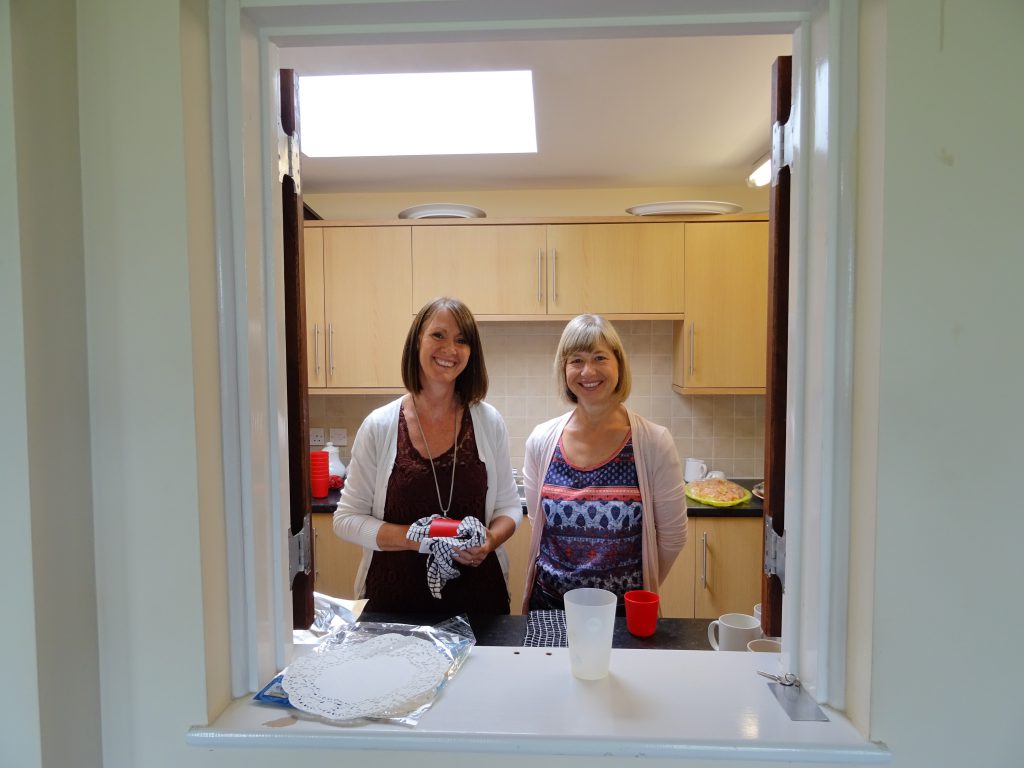 There were also double-figure scores for Jono Hill, John Howells and Adrian Susman, but the OOB bowlers regained control just in time, as the Bedouins finished 16 runs short at 170 for 6.

Photos from the day are courtesy of Mike George and are available here.